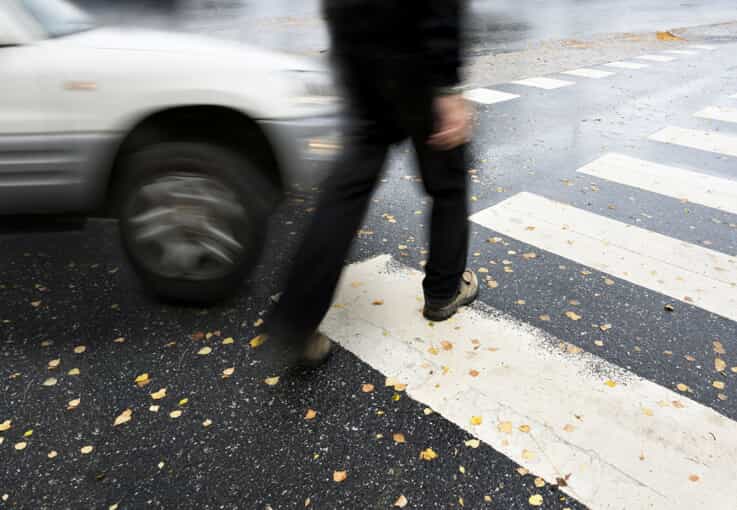 When an individual isn’t driving and becomes a pedestrian walking on a sidewalk, they sometimes believe they are safer than they would be traveling in a vehicle. However, the Centers for Disease Control reports pedestrians are 1.5 times more likely to be fatally injured during a crash than a passenger traveling in a vehicle. In 2010 alone, the number of pedestrians injured in a vehicle crash was reported to be 70,000, of which around 4,000 died as a result of their injuries.

These sobering figures show how important it is to be careful on the roads, whether driving or when walking and crossing any street. In some circumstances, a crash involving a pedestrian and vehicle is unavoidable, with specific accidents being the fault of either the driver or the pedestrian. Apportioning blame may not be the first thing on the mind of an injured party, whether they are a driver or pedestrian, but this can be an important aspect of making sure the responsible person is held accountable and the proper assistance is awarded to those facing expensive medical or funeral expenses.

In general, the elderly and children are at the greatest risk of being involved in pedestrian and vehicle collisions, the aftermath of any crash can be traumatic and difficult to comprehend.  In some cities, notoriously Orlando, there are many people that jaywalk because of the long distances between designated crosswalks.  This is especially true during the summertime when temperatures reach triple digits.  Imagine this scenario:  there are people walking back from the grocery in the blistering heat with bags weighing down on both arms.  The closest crosswalk is 8 blocks away – or they can cross across the 4 lane road to a thin median and then cross again.  Trucks and cars are coming at all times easily 10-15 miles per hour over the speed limit, and a few cars here and there are going even faster.

This situation happens all too often in the state of Florida, earning it the spot as the most dangerous states for pedestrians in the country, according to one study.  The idea of being hit by a car while walking in Florida is terrifying – residents along sidewalks should often be as cautious about their surroundings as they are behind a wheel of a vehicle.  This means checking if cars are actually stopping before being cleared for a crosswalk – many drivers are running red lights.  Try to avoid jaywalking to a median because of the number of drivers that do drive up on them because of carelessness.  Try to make eye contact with drivers as often as possible before crossing any streets.

Whether those involved or their loved ones are interviewed by the police, it is important to always offer every form of assistance to the authorities as they look to find the cause of any collision between a pedestrian and a vehicle.  It may be in your best interest to seek out a lawyer that works specifically with pedestrian accidents.

As soon as a collision takes place and the injured parties are being treated by medical professionals, it is important to make sure one of the first calls made is to a personal injury lawyer. This is an important aspect in order to not only protect the injured party from blame being quickly apportioned to the injured party and can be important in making sure the best chance of reducing the financial burden of medical costs is reduced for those injured in any collision.