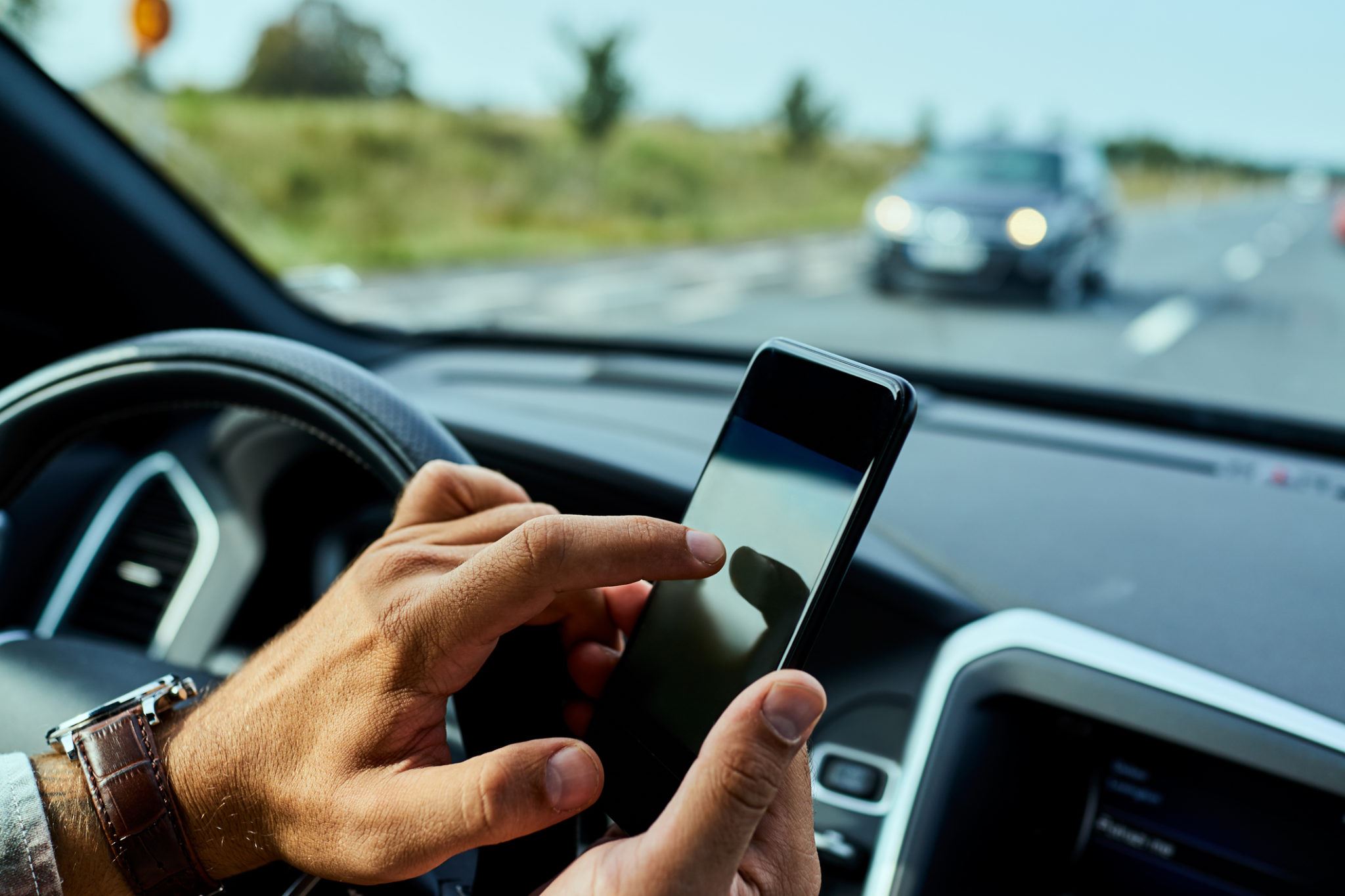 Distracted driving is more of a problem today than it has ever been, and the majority of distracted driving cases revolve around the use of a cellphone to send text messages. Almost everyone has encountered texting drivers in one form or another on the busy streets of America, and Florida is one of the most affected states. The problem of texting and driving is a new epidemic that does not hold itself to one specific region, and it has been responsible for numerous fatalities.

Distracted driving poses a significant danger, and worse yet, most people have no idea exactly how dangerous it can be. Many people think that using their phone while driving can’t possibly affect their reaction or attention, so they text without thinking about the consequences.

The average texting driver stops looking at the road for 4.6 seconds at a time in order to send or read text messages. If the driver is traveling at a mere 55 MPH, that means they will travel the length of a football field before they look back at the road. Distracted driving is responsible for approximately eight deaths in the United States every single day.

Cell phones have had an immeasurable impact on our daily lives; the ability to be constantly connected to friends and family, to receive up-to-the-minute updates on situations and circumstances that impact us, has been profoundly valuable. It has also led to habits that can become profoundly dangerous.

Almost 25% of all automobile accidents in a study conducted by the National Safety Council involved the use of cell phones; and in spite of laws in 47 out of 50 states against cell phone use while driving, accidents due to texting or speaking while driving continue to happen.

United States Secretary of Transportation Ray LaHood has likened distracted driving—particularly that caused by cellphone use behind the wheel—to an epidemic. According to FocusDriven, a group formed by Secretary LaHood to combat the dangerous practice, some 5,474 people were killed by distracted driving in 2009 alone, while 448,000 people were injured by the same cause in that year.

Young drivers are also more likely to report texting while driving, according to a 2009 IIHS study. A 2011 study conducted by the federal government found similar results. Drivers who are more prone to risk-taking generally are the ones who may use their cellphones more frequently as well.

The risks are real; two controlled studies demonstrated that cellphone users are more likely to get into crashes than non-distracted drivers. One study conducted in 2005 in Western Australia found a fourfold increase in the risk of a crash resulting in serious injuries. Another study conducted in Canada found a similar risk increase. Based on statistics from the U.S. Department of Transportation’s Fatality Analysis Reporting System, taking data from police across the country, some 3,331 people were killed in crashes that resulted from distracted driving in 2011.

The effect of cell phone usage on driving has been more extensively researched than the actual statistics of cellphone-related crashes; a review conducted by the IIHS found that out of 54 experimental studies using simulators or specially-configured and –outfitted vehicles, nearly all reported some measures of driver performance were affected.

The minimum time that a driver has his or her attention off of the road when using a cellphone is five seconds. Depending on the speed, that can constitute a considerable distance traveled without looking at the road. Even talking limits the amount of attention that a driver can pay; the brain is not good at multi-tasking.

Many companies have begun to offer phone apps that allow a driver to pre-set an automatic response to any family, friends, or colleagues who attempt to contact them while they’re driving, and out of the United States, only three states have no ban at all: South Carolina, Arizona, and Montana. It is absolutely best to be safe and avoid a car accident, rather than find yourself in the position of needing to contact a car accident attorney.

Recent History of Texting and Driving Legislation in Florida 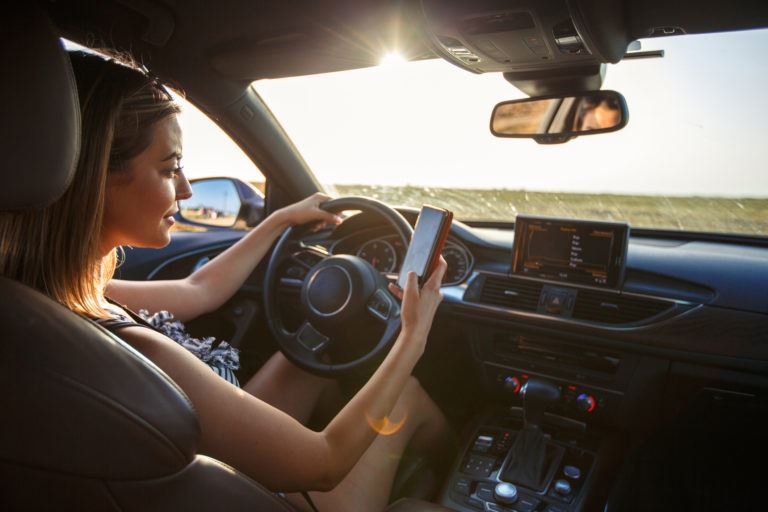 Many states proactively instituted laws that address cellular phone and mobile device use while driving. Due to the high number of accidents caused by distracted driving, states finally started to enforce existing laws as well as create new regulations that would reduce the number of drivers who text while driving.

In 2014, Florida governor Rick Scott emphatically announced that his state was doing its part to protect drivers on Florida roadways. The new law banned texting while driving and added other stipulations regarding handheld mobile devices when drivers are behind the wheel of a moving vehicle.

Like other state legislation regarding sending or reading text messages while driving, Florida’s law was known as a secondary offense. This meant that if a police officer had suspicion that a driver was texting but had not committed any other infraction, they could not be stopped and questioned. If a driver was not wearing a seat belt, ran a red light or stop sign, or committed any other traffic offense; they could be pulled over and cited for both offenses during the same stop.

Some members of the public believed that legislation should be able to actually discourage texting while driving by making it a primary offense. As a response, legislators introduced several bills addressing the issue. Examples include the Texting While Driving in a School Zone, Driving Safety and Wireless Communication Devices bills.

Rep. Richard Stark (D-104) and Sen. Maria Lorts Sachs (D-34) proposed the Texting While Driving in a School Zone bill. Its objective is to double the fine for drivers who text at a designated school crossing or while driving through a posted active school zone.

The Driving Safety Bill, coming from Rep. Irving Slosberg (D-91) and Sen. Geraldine Thompson (D-12), had a simple objective: to turn texting while driving into a primary traffic violation. This would allow enforcement action against drivers who text without having committed any other violation of traffic laws.

Finally, the Wireless Communication Devices bill, brought forward by Rep. Keith Perry (R-21) and Sen. Thad Altman (R-16), would revise the legislative intent of the law making texting while driving a secondary offense. It would permit penalties for violations of the texting ban without requiring that law enforcement officers witness another violation first.

Unfortunately, none of these bills were ultimately ratified in 2016, and distracted driving accidents across the state of Florida continued to rise.

In an effort to reduce the number of accidents caused by texting and driving, a couple of bills awaited debate in Tallahassee during the 2017 legislative sessions.

HB 47 proposed that law enforcement officials should be allowed to pull over drivers whom they believe are texting behind the wheel as a primary offense. Under the current statute, texting and driving served a secondary offense. This meant that state troopers, sheriff’s deputies and municipal police officers could only tack on a $30 texting-and-driving citation after they have pulled over a driver for another reason.

HB 69 also would have made texting and driving a primary offense. Moreover, it would have also introduced certain provisions to target drivers under the age of 18, who are more likely to develop a habit of operating their smartphones while operating motor vehicles.

Sadly, as was the case in 2016, neither of these bills advanced through the state legislature.

On January 10, 2018, the Florida Senate panel passed a bill that would ban texting while driving. The bill classified texting and driving as a primary offense. The bill was passed with a 5-0 vote, and the following year…

Texting and driving finally became a primary offense on July 1st, 2019. Police can now stop motorists solely on their suspicion that a driver is texting while operating a vehicle. Officers would give only warnings through the end of the year, but beginning in 2020, they would start issuing uniform traffic citations.

A first-offense under this law is punishable by a $30 fine in addition to court fees. A second offense doubles this fine, and also issues three points on the driver’s license. To possibly avoid fees and license penalties, offenders may purchase hands-free Bluetooth devices, show proof of purchase, and complete a “Driver Safety Education” course.

For more information on what to do if you’ve fallen victim to a distracted driver, please visit our page discussing car accidents or contact Zimmerman & Frachtman today to speak with an attorney immediately.